Isn’t it peculiar how you never really appreciate a place and its people until it’s time to say farewell? It’s been a tearful morning as I left Bragança for the last time, and who knows if I can come back? Aurimar’s father came to breakfast with a gloomy air I never had seen on him before, and he explained to me that he was very sad that I was leaving. 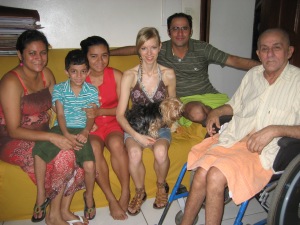 His wife was equally upset but managed to put a smile on her face for the family photo I had asked for. Even the bird fell silent. The only one that seemed herself was Chrissie, energetically wagging her tail and nipping my fingers. 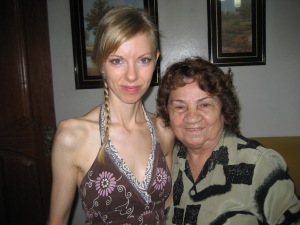 Aurimar helped carry Diego’s cello to the bus that would take me to Tracuateua, and the silence said it all. Me, the ice queen, who discreetly wiped my tears away, and he, the latino, who unsuccessfully tried not to cry, his lips shivering and eyes that welled up. Getting off the bus he exclaimed, “God loves you – I love you!” I swallowed the lump in my throat and tried to think happy thoughts. AMA Institute has been closed for over a week now, as Aurimar hasn’t been able to pay for it’s only music teacher. We have been going through a lot during the past three months, Aurimar and me – there’s been a lot of confusion and frustration, as well as plenty of absurd moments and laughter, and I freely admit I will miss him and his sometimes-surreal household.

Diego had told me that my presence here would be important, but I never understood why. He kept saying I was going to bring a Blonde Revolution to the Amazon. Thinking back, what have I achieved?

Well, first of all – Chrissie. After reading one of my posts Aurimar promptly went out and bought a bright pink leash for her, and the following day we went for our first walk. She had no clue what to do at first, bless her, and nervously looked up to me for some kind of guidance. “You know, pee in the grass and sniff around for handsome males…?”, I suggested.

Then there’s the time-keeping. The Pastor and I had a “moment” after I had been left waiting for him to pick me up, for half an hour, despite the fact that I had called him three times and he only lives one minute away. He was so taken by my indignation that henceforth he always made sure to arrive early. Success.

Aurimar proudly announced that from now on he will eat more vegetarian food, thanks to me. He even went so far as to urge me to raise his son, but I graciously declined, considering I was sitting next to his wife.

We haven’t had enough time to build up the youth orchestras yet, but I hope I have grown a seed of classical music, through the Christmas Tour I did with Diego and Professora Lenita; and through my teaching. I have brought the violin method I used in London, which is infinitely more attractive and fun than the one they had been using until now. I started teaching in smaller groups of two or three students, and some individual, instead of the whole class teaching that was the norm before, even though the level of playing varied a lot. Yesterday, at my last group class, I was given a small angel, playing the violin, as a farewell gift from one of my students. They, too, seemed sad that I was leaving. My top student asked me to bring a violin concerto for him next time I come. I just hope I can return to fulfill my mission.