I don’t know many teenagers in Europe that would crawl out of bed at 3am to get in time for their music lesson in a neighbouring city. In Bragança, however, there’s a surplus of kids whose life revolves around AMA Institute, where I teach the violin, and since a few weeks time, am directing as well. Aurimar asked Diego and me to help him bring some European organizational and financial skills to the institute to keep it afloat. AMA was founded by his father, Aurimar Monteiro de Araújo in 2005, as a means to preserve the tradition of rabeca, an instrument very similar to the violin, and which only exists in northeast Brazil. It came from Portugal and is a descendent of the rebec, a medieval stringed instrument. There are only three rabeca masters still alive in the Bragança area, and Aurimar Sr is one of them. AMA is more than just a music school; it’s like a youth social centre, where the kids hang out in the evenings, even if they don’t have lessons. Most of the students come from very poor homes, and that’s why the school doesn’t charge a fee. Instead it relies on donations from local businesses and private donations. 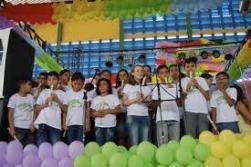 The institute provides an alternative activity to some of the social problems that exists in the area, such as drugs, crime and violence. Some of the pupils are former child-prostitutes. The school doesn’t have separate classrooms, and quite often there are parallel classes going on, creating a very noisy environment. Neither does it have toilets or running water, due to a lack of funds, even though it has won many awards for its work. It has one full-time teacher that’s teaching wind and brass instruments, music theory as well as conducting a band.

Aurimar Sr is a very special and generous person. He has one biological son, but adopted 31 others in his lifetime, in order to help them out of poverty. Now, however, he sits in a wheelchair, due to a muscular disease. Once in a while I find him in the shop, run by Aurimar Jr’s wife (in her spare time, when she doesn’t work as a social secretary) below the apartment. How he gets down there is still a mystery, as there is only a long and winding staircase up to the flat.

Every time I have finished a meal he asks “Já? Só?” – “Already? Not more?” and he is very concerned about my wellbeing in general. The world needs more people like him!